Edward Gerhard’s Night Birds will most probably please any fan of the guitar. The album is straightforward: a well-paced, varied palette of texture and mood, ranging from the playfulness of “Duet” and “Spike 2″; to the English-style guitar and counterpoint of”No. 7,” to the slide playing of “Night birds.” 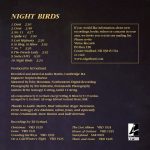 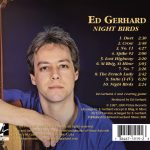 Gerhard’s playing is clean and precise, yet fluid and lush. One of the many strengths of this record is Gerhard’s inventive use of tunings, which is partially responsible for the variety of color from one composition to another. Whatever influence he draws from is weaved into a larger idea. Gerhard’s approach is consistent — a strong melodic sense and agility and grace in execution.

All of the compositions are originals with the exception of O’Carolan’s, “Si Bhig, Si Mhor,” which Gerhard stamps with his own rich voicings and style. Gerhard also does a splendid job as producer of this album, as does engineer Steve Burton. It’s hard to believe that this is only Gerhard’s first recording; but it is evident that he will prove to be an artist of lasting importance. -KE