There are a number of us who find joy in collecting pawnshop guitars – you know the type, cheap, affordable, and ever so
quirky. There’s a certain pleasure in having one of these beaters that you can drag to the beach while keeping the good wood at home. However, there are few among us who would set foot onstage – let alone a studio – with one of these ill-tempered, sometimes untunable beasts.

Ed Gerhard, a guitarist noted for his beautiful compositions, exquisite tone, and occasional odd tricks (ever try wrapping rubber bands around your strings at the bridge for a muted tone… on a 12-string?) took his love for tone back in time and gathered an assortment of pawnshop players in a quest for a quality of a different sort.

Gerhard’s seventh album, House of Guitars, is a well-balanced collection of esoteric compositions ranging from Gerhard signature arrangements of traditional tunes to covers of some very tasty McCartney and Lennon tunes. In addition, four of the tracks are original compositions.

Gerhard is the solo artist on his latest work, with the exception of one cut (“Because of You, This”) where he is joined by Randy Roos on bass and Ray Brunelle on drums. However, this work has only one cut (Paul McCartney’s “Junk”) that showcases Gerhard in his cleanest element: solo guitar. The rest of the tracks usually open with a single guitar, showcased with whatever tonal challenges that might exist, soon to be joined by layered tracks of Gerhard backing himself on one or more of the other pawnshop prizes.

From the soulful “I Just Can’t Keep From Crying Sometimes,” where Gerhard slides a tale of sorrow based on an old Blind Willie Johnson traditional, to the deeply moving “Let It Be Me,” this homage to plywood and plastic is proof that it when it comes to beauty, it’s the player, not the instrument. 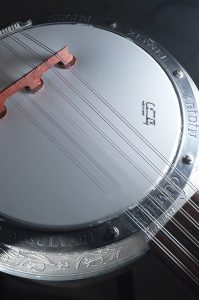 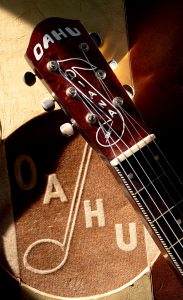 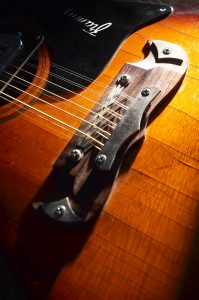 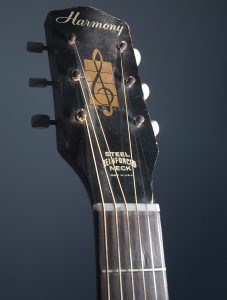 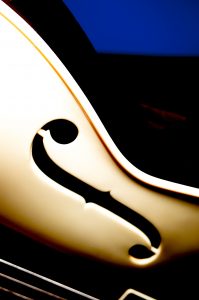 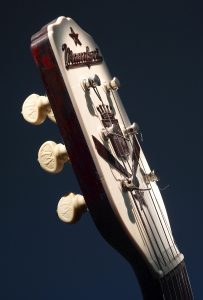 In other words, House of Guitars should not be played when trying to convince your significant other that you need to add a new guitar to the collection! That said, any guitarist worth his calluses will soon be searching the family attics and closets for forgotten garage-sale gut boxes.

Playing such oddities as a Maccaferri plastic archtop, Harmony Sovereign and 000-flat top, a Framus 12-string, a Supro doubleneck lapsteel and numerous Oahu guitars including a roundneck slide, Tonemaster lapsteel, and a Hawaiian, Gerhard kept his quest true by performing minimal setups on the guitars – in some cases, not even installing new strings!

Pop in this CD, sit in your most comfortable chair, and close your eyes. It’s almost as if Gerhard walks into your living room, picks up one of your old beaters, and plays a tune or two just for you. Like a master challenged with the task of turning water into wine, Gerhard takes these pawnshop relics and somehow turns the dead strings and buzzes into the very artistic accents that make this work a pleasure to explore.

This article originally appeared in VG‘s July. ’02 issue. All copyrights are by the author and Vintage Guitar magazine. Unauthorized replication or use is strictly prohibited.